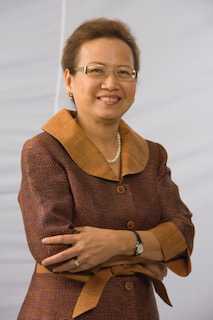 Tarisa Watanagase is a former governor of the Bank of Thailand.

She was instrumental in the 1997 Thai crisis resolution and the ensuing supervisory and financial sector reforms, the modernization of the Thai payment system, including the first settlement risk-free high-value fund transfers in Asia, the passage and successful adoption of legislation guaranteeing central bank independence, and the successful steering of the economy and banking sector through the global financial crisis in 2008.

She has served as an economist at the International Monetary Fund and as an advisor to the World Bank Group and regional central banks. She speaks frequently on central banking and financial sector issues and is an author of numerous articles on those subjects.

Dr. Watanagase holds a Master’s from Keio University in Tokyo, Japan, and a PhD from Washington University in St. Louis in the United States.